A host of big names are currently in the running for the year-end WTA Elite Trophy in Zhuhai, which begins on October 31.

Newly-crowned US Open champion Sloane Stephens, US Open runner-up Madison Keys, former World No.1 Angelique Kerber and Frenchwomen Kristina Mladenovic and Caroline Garcia are among those well placed to qualify for what is likely to be a strong field for the final WTA event of the 2017 season.

The Shine In Zhuhai Leaderboard is made up of players ranked nine and above based on this year’s results and includes one wildcard. The final 12 singles players in Zhuhai will be decided finally on 22nd October, when the last ball of the regular WTA season is struck, thus paving the way for the WTA Finals and WTA Elite Trophy season-ending showcases.

Please find below the Shine in Zhuhai Leaderboard for this week (as of 25th September).

Sloane Stephens on potentially qualifying for the 2017 WTA Elite Trophy Zhuhai:
“I mean, this is when it gets a little sticky, because everybody is, like, canoodling for a spot. We’ll see. I hope I make it, but everyone is going to compete really hard the next couple of weeks, so it will be interesting.

“I think obviously it would be awesome. More points at the end of the year. I could set myself up to be in a good position to start next year. I would love to qualify. Like, that would be amazing. But, I mean, there’s girls who have played all season long and worked really hard for it, as well.

Caroline Garcia on potentially qualifying for the 2017 WTA Elite Trophy Zhuhai::
“I did it last year and it was a very nice experience. Very tough draw, very tough matches. I want to keep improving on the court and focus each tournament but I know on the race I am good to go there and it’s a great tournament and there is a lot of experience you can gain from going there.” 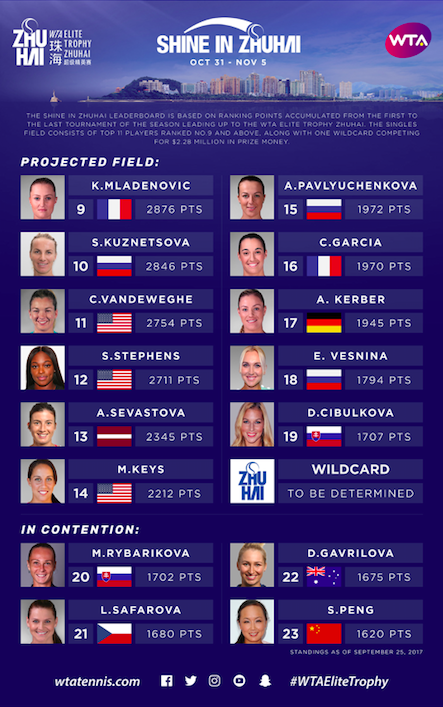