Alexander Zverev, one of the most exciting young players on the ATP World Tour, is set to return to the Nitto ATP Finals, to be held 11-18 November at The O2 in London. The 21-year-old German has qualified for the second successive year and joins Rafael Nadal, Novak Djokovic, Juan Martin del Potro and Roger Federer in the 2018 field.

“It’s great to finally officially make it and again be a part of the best eight, which is an elite group,” said Zverev. “It is a goal for everyone at the beginning of the season. I’m very pleased to be in London again and get another opportunity to play there for the second year in a row. I’m looking forward to the tournament.

“I put it close to equal as a Grand Slam, actually. It’s probably one of the most prestigious events that we have, because to get there, you have to be one of the best eight players in the world… Just being a part of it, just playing there is already an honour itself. It’s close to, or it’s maybe equal to winning a Grand Slam, and I think other players will tell you the same thing, because just to be there, you obviously play well throughout the whole year.”

Zverev, who secured his place by beating Kyle Edmund to reach the semi-finals of the Rolex Shanghai Masters on Friday, is the first German to clinch a berth in successive years at the season finale since three-time former champion Boris Becker (1985-92, 1994-96). In 2017, Zverev became the youngest player to compete at the season-ending tournament since 20-year-old Del Potro in 2008 and was the first German singles qualifier since Rainer Schuettler in 2003. 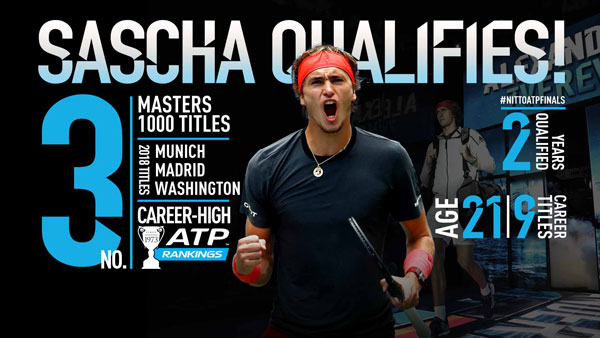 With a 49-15 match record this year, Zverev has compiled the most tour-level victories in 2018, breaking a tie with Dominic Thiem (48), who is also in the running to take one of the three remaining singles berths with one month to go until the start of the Nitto ATP Finals.

Zverev picked up his third ATP World Tour Masters 1000 crown in May at the Mutua Madrid Open (d. Thiem), becoming the first player to win a clay-court title without being broken since the ATP started keeping stats in 1991. He also successfully retained titles at both the BMW Open by FWU in Munich (d. Kohlschreiber) and the Citi Open in Washington, D.C. (d. De Minaur). Additionally, he finished runner-up in two Masters 1000 finals, the Miami Open presented by Itau (l. to Isner) and the Internazionali BNL d’Italia in Rome (l. to Nadal).

Croatia’s Marin Cilic is next in line to qualify for the Nitto ATP Finals for the fourth time, followed by Kevin Anderson of South Africa and Austria’s Thiem, who all feature in the Top 8 in the ATP Race To London. Oliver Marach and Mate Pavic, Juan Sebastian Cabal and Robert Farah, and Jamie Murray and Bruno Soares are the only doubles team to have clinched a place at London in November.