Austria’s Oliver Marach and Croatia’s Mate Pavic have clinched the year-end No. 1 ATP Doubles Team Ranking for the first time as a result of Friday’s play at the Rolex Paris Masters, the final event of the regular ATP World Tour season.

“It’s been an unbelievable year,” said Marach. “Winning three tournaments in a row, and coming close in a fourth final, was incredible. We played solid tennis throughout the year, reached another Grand Slam final at Roland Garros and now, here again in Paris, we’re in the semi-finals. We’re very happy. “

Pavic said, “We had a great year and a good start. Overall, we lost two or three first rounds, with lots of quarter-finals and semi-finals. We’re extremely happy to finish the year at No. 1 and we’re looking forward to finishing strongly this week, and also [at the Nitto ATP Finals] in London.” 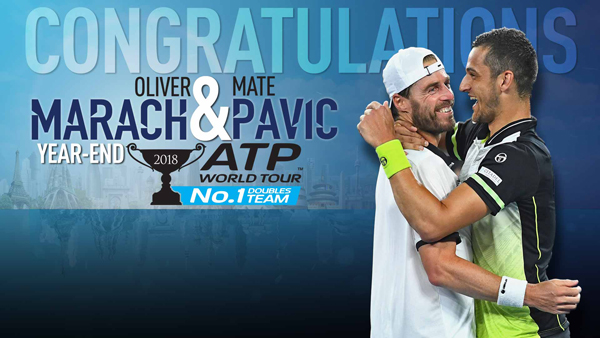 Marach and Pavic have captured four doubles titles in 2018. They opened the year by lifting three consecutive trophies at the Qatar ExxonMobil Open in Doha (d. Murray/Soares), the ASB Classic in Auckland (d. Mirnyi/Oswald) and their first Grand Slam championship at the Australian Open (d. Cabal/Farah). Their 17-match winning streak to start 2018 came to an end on 18 February with a runner-up finish at the ABN AMRO World Tennis Tournament in Rotterdam (l. to Herbert/Mahut), one of three ATP World Tour 500-level final appearances this season.

The players captured their fourth team crown of 2018 at the Banque Eric Sturdza Geneva Open (d. Dodig/Ram) in May. In addition to their runner-up finish in Rotterdam, Marach and Pavic contested their third Grand Slam final at Roland Garros (l. to Herbert/Mahut) in June, the Rolex Monte-Carlo Masters (l. to Bryan/Bryan), an ATP World Tour Masters 1000 tournament in April, plus the German Tennis Championships 2018 presented by Kampmann (l. to Peralta/Zeballos) and the China Open in Beijing (l. to Kubot/Melo).

Chris Kermode, the ATP Executive Chairman & President, said, “To finish the season as the year-end No.1 team is the ultimate accolade, a reflection of excellence and consistency throughout a gruelling doubles season that covers 67 tournaments across 31 countries. From January to November, it’s the prize that all teams are chasing, and Oliver and Mate should be hugely proud of their achievements. On behalf of the ATP, many congratulations on a remarkable season.”

Together, Marach and Pavic have compiled a 5-8 record in tour-level finals and were the first team to qualify for the 2018 Nitto ATP Finals, to be held at The O2 in London from 11-18 November. In 2017, the Austrian-Croatian tandem went 1-3 in title matches, including a runner-up finish at Wimbledon (l. to Kubot/Melo).