Croatia’s Marin Cilic and Austria’s Dominic Thiem have clinched the two final spots at the prestigious season-ending tournament, to be held from 11-18 November at The O2 in London, as a result of Friday’s play at the Rolex Paris Masters. 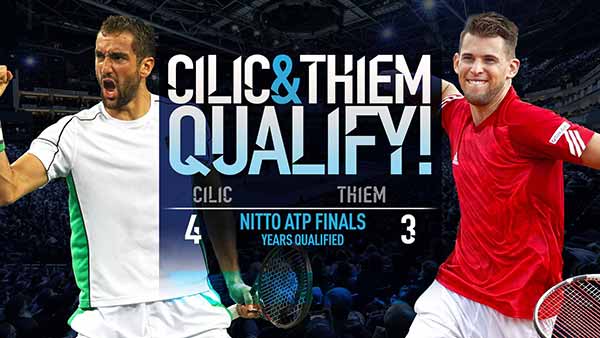 This season, the 30-year-old Cilic claimed his second Fever-Tree Championships crown at The Queen’s Club in June (d. Djokovic), and reached his third Grand Slam championship final (also 2014 US Open and 2017 Wimbledon) at the Australian Open in January (l. to Federer). He also advanced to semi-finals at two Masters 1000 tournaments — the Internazionali BNL d’Italia in Rome (l. to A. Zverev) and the Western & Southern Open in Cincinnati (l. to Djokovic) — plus the last four at the Tata Open Maharashtra (l. to Simon), an ATP World Tour 250-level event in Pune. World No. 7 Cilic, who rose to a career-high No. 3 in the ATP Rankings on 29 January 2018, has won at least one ATP World Tour title for 11 consecutive years (2008-2018). His 18 career titles are the second-most for a Croatian behind Goran Ivanisevic with 22 crowns.

Thiem, 25, has recorded 50+ match wins for the second time in his career — compiling a 53-17 match record with three titles, bettered only by his 2016 season when he posted a 58-24 mark with four titles. The World No. 8 has lifted trophies in 2018 at three ATP World Tour 250-level tournaments — the Argentina Open in Buenos Aires (d. Bedene), the Open Parc Auvergne-Rhône-Alpes Lyon (d. Simon) and the St. Petersburg Open (d. Klizan). He also finished as runner-up at Roland Garros (l. to Nadal), his first Grand Slam championship final, and for the second successive year at the Mutua Madrid Open (l. to Zverev), a Masters 1000 event.

Per ATP rules, the doubles field will be determined on 5 November following the conclusion of the Rolex Paris Masters, the final tournament of the regular ATP World Tour season. On that date, it will be determined what the eight teams will be as both Bob Bryan and Mike Bryan and also Mike Bryan and Jack Sock currently have sufficient points in the ATP Doubles Race To London to secure a place at the season finale. Bob Bryan has been sidelined due to a hip injury since May, but he may be fit enough to return with his twin brother to the prestigious event.

2018 GROUP NAMES:
The Finals Club, an initiative launched by the ATP in 2015 as a way of celebrating the past champions and heritage of the season-ending tournament since its inception in 1970, will this year honour players from the 2000s. As such, the group names for singles and doubles will honour players who enjoyed remarkable success at the season finale during that decade: