For the first time in its history, the Nitto ATP Finals will introduce a new fan engagement feature that will measure crowd noise within the O2 arena during matches, the ATP announced on Sunday prior to this year’s prestigious season-ending tournament getting underway.

Since 2009, the season-ending event at The O2 has generated an array of thrilling matches and raucous atmospheres inside the 17,800 capacity stadium. The Infosys ATP Fan Meter will be used for the first time and will measure fan noise which will be displayed on the giant screens as well as on the arenamation around the arena. 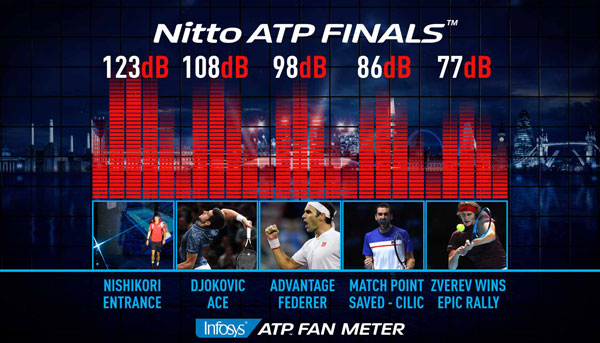 The Infosys ATP Fan Meter will allow fans, media and broadcasters to track the loudest moments throughout the tournament across singles and doubles, from player walk-ons, match points, hot shots and more. Loud moments will be displayed at least once per set in all matches. The new noise measurement feature represents the latest initiative in an ATP and Infosys partnership that continues to showcase the integration of technology and data in sport as a means of enhancing fan engagement.

Adam Hogg, Event Director of the Nitto ATP Finals, said: “The Nitto ATP Finals has become renowned for its capacity crowds and exhilarating atmospheres since 2009. We’ve welcomed more than 2.3 million fans into the arena during that time and the introduction of the Infosys ATP Fan Meter is an exciting way to engage further with our enthusiastic fans and directly measure the level of fan involvement in the spectacular production of our season-ending event.”

The graphics generated during the matches will be promoted on line through Social Media and through ATPWorldTour.com online.

Ravi Kumar S, President, Infosys said: “The Infosys and ATP partnership has always been about reimagining the game of tennis for players, coaches, media and fans. After many breakthrough experiences like virtual reality tennis, the Stats Leaderboards and the Second Screen, we have another first with the ‘Infosys ATP Fan Meter’. This is another important step to place fans at the heart of the ATP experience. Till now, we had limited means to quantify audience engagement and excitement levels. The Fan Meter leverages the Internet of Things to create a connected stadium experience and gives us a new way of understanding the pulse of a live audience by combining the sensory element of sound with powerful data analytics.”

In addition to the Infosys ATP Fan Meter, Infosys and the ATP have upgraded the second screen available on NittoATPFinals.com to make it more mobile-friendly, with a focus on an updated design, demonstrating Infosys’s digital expertise in mobility and design. A new series of features have also been added on the tournament website including an all-new live score analytics offering, serve and return ratings as well as social sentiment analysis bringing in the conversation fans are having, all within the same platform.