Novak Djokovic was today presented with the 2018 year-end ATP World Tour No. 1 trophy during an on-court presentation at the Nitto ATP Finals, the season finale at The O2 in London. The Serbian is one of only four players in ATP Rankings history (since 1973) to have clinched the year-end top spot on five (or more) occasions, joining Pete Sampras (six), Jimmy Connors and Roger Federer (both five times).

“Next to the Grand Slams and the [Nitto] ATP Finals, being No. 1 is probably the ultimate challenge in our sport,” said Djokovic. “It’s the pinnacle of the entire season. I’m very proud of that achievement and it’s extra special this year because of the whole process and the journey that I’ve been through in the past 15 months. In particularly, the past 8-10 months.

“After February’s elbow surgery, it looked quite improbable that I’d be in this position as a year-end No. 1. Not just because of the rankings, being No. 22, but also because of how I felt on the court and how I played. But there was always a part of me that believed I could make it back and I never thought it was impossible.” 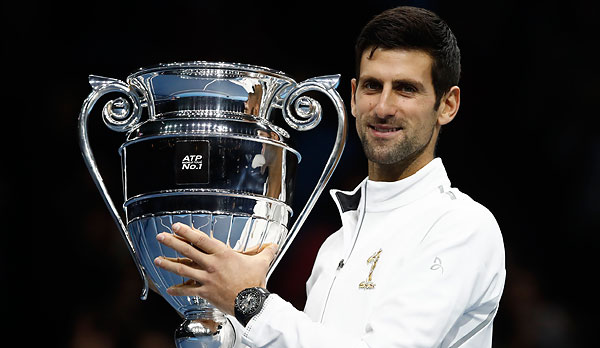 Djokovic underwent surgery on his right elbow after the Australian Open, which was his first tournament in six months. He reunited with long-time coach Marian Vajda at the Rolex Monte-Carlo Masters in April and entered the Internazionali BNL d’Italia in May with a 6-6 record. Djokovic has since compiled a 43-5 match record, including a 31-2 mark since the start of Wimbledon.