The Challenger of the Year Awards recognise excellence in standards set across the global Challenger Tour comprising 159 tournaments staged in 40 countries last year. Vancouver’s Odlum Brown VanOpen, relaunched in 2017, and the NECKARCUP, staged for five years in Heilbronn, have continued ambitious improvements each year, while the Puerto Vallarta Open burst onto the calendar with an exceptional inaugural event.

ATP Challenger Tour Committee Co-Chairs, Alison Lee, ATP International Executive Vice President and Ross Hutchins, Chief Player Officer, said “These three Challengers are relatively new on the ATP Challenger Tour calendar and the organisers have set themselves very high standards to win these awards of excellence. It takes hard work, dedication and a passion for tennis to make successful tournaments, and players, fans, sponsors and media will have all seen these Challenger promoters’ enormous efforts come to fruition.” 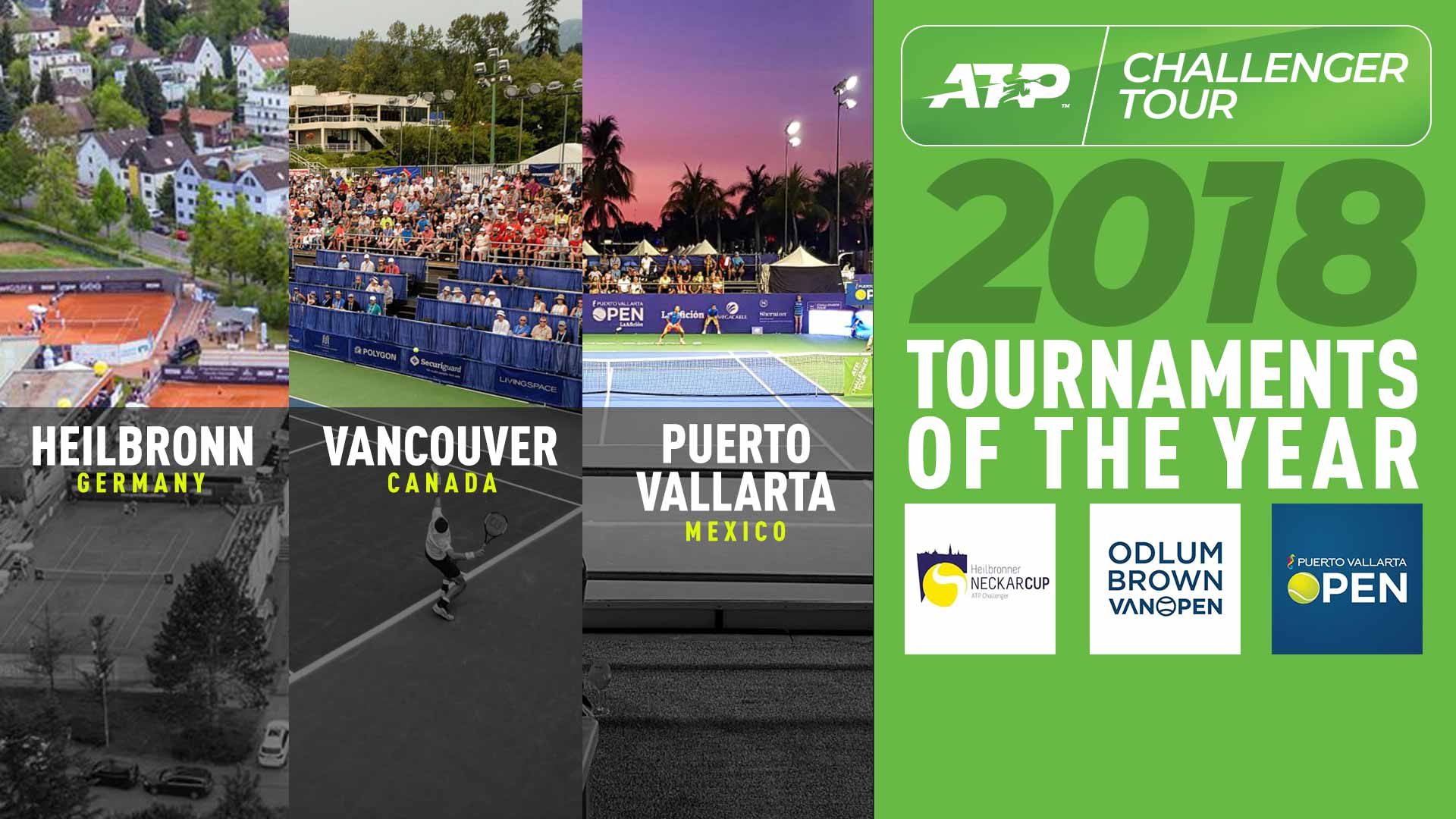 Odlum Brown VanOpen Tournament Chair Carlota Lee said: “It is a thrill to be honoured as one of the 2018 Challenger of the Year Award winners for the second straight year. The Tournament of the Year Award represents the great work of our team, including Hollyburn Country Club members and staff, incredible partners, officials, volunteers and ball kids, and our steadfast and supportive title sponsor, Odlum Brown, whose commitment to tennis in Canada makes our tournament possible.”

“We are honoured to receive the prestigious Challenger of the Year Award for a second consecutive year as voted by the players. We offer a unique player experience and strive to improve on it year after year,” said Odlum Brown VanOpen Tournament Director Rik de Voest. “We look forward to this year’s event and upholding the reputation as one of the players’ favourite Challenger Tour tournaments in the world.”

NECKARCUP Tournament Director Metehan Cebeci and Chief of Organisations Mine Cebeci said: “You cannot imagine how lucky we feel to be awarded again for the best Challenger. This is the best news for us and is such an honour. The award is a great motivation for us, knowing the players are satisfied with our efforts. We really appreciate receiving this award as it shows us that all our efforts and passionate work lead to this success.”

Puerto Vallarta Open Tournament Director, Francisco Javier Romero Gonzalez, said, “We are proud of promoting sports values among Mexicans. We sincerely thank ATP and are deeply grateful to all those who made PVO possible, not only those who worked and contributed their knowledge, but also those who believed in us and placed their trust in our first edition of the Puerto Vallarta Open.

“It is a source of great joy to be able to take the name of Puerto Vallarta to the highest place in world tennis and present it for what it is, one of the most complete and beautiful tourist destinations on the planet.”

The ATP Challenger Tour is a launching pad for up-and-coming players to improve their skills, gain experience and necessary ATP Ranking points. Challenger tournaments provide ATP players with important playing opportunities for much of the year and provide local tennis fans with the chance to see world-class tennis and rising stars.

Changes on the ATP Challenger Tour 2019

In 2019, a number of changes have been introduced to the Challenger Tour to further professionalise the sport and provide growth in prize money at the lower levels of men’s professional tennis, and lead to a greatly enhanced player pathway. The changes for 2019 are the result of an extensive strategic review the ATP has undertaken as it strives to enhance the player pathway and improve the viability of professional tennis at the lower levels of the sport.

The changes taking place from 2019 are across the following key areas of the ATP Challenger Tour:

➢ Draw Size
The Singles Main Draw size at ATP Challenger Tour events is increasing from 32 to 48, leading to an annual increase of approximately 2,400 available professional job opportunities with prize money and hotel accommodation included.
➢ Tournament Schedule
Tournaments will take place across 7 days from Monday to Sunday including qualifying, with no overlap from week to week between tournaments.
➢ Hospitality
Starting in 2019, all ATP Challenger tournaments are providing hotel accommodation for all Main Draw players.
➢ Prize Money
All Main Draw players will earn prize money. The increased Singles Main Draw size (from 32 to 48) will lead to 16 more players per tournament earning prize money from 2019. The highest-level Challengers will offer US$ 162,480 (€137,560) in 2019.
➢ Branding
ATP Challenger Tour tournament categories have been re-branded in accordance with the number of ATP Rankings points on offer to the respective tournament champion, similar to ATP Tour tournaments (ATP 250, 500, and Masters 1000). There are five ATP Challenger Tour categories – ATP Challenger 80, 90, 100, 110 and 125.
➢ On-Site Facilities, Conditions and Streaming
Increased services will be provided across ATP Officiating as well as ATP Medical Services, with better access on offer to qualified Physiotherapists. From 2019, all Main Draw Singles matches are intended to be streamed online, with more than double the number of matches available to viewers worldwide.