Roger Federer has qualified for the Nitto ATP Finals for a record-extending 17th time after winning his first-round match against qualifier Sumit Nagal on Monday night at the US Open. Federer will attempt to capture a seventh season-ending crown alongside five-time former titlist Novak Djokovic and Rafael Nadal, who have already clinched their places, at The O2 in London from 10-17 November.

“I really look forward to returning to London to play at The O2,” said Federer. “It is always one of the main goals to qualify for the year-end event. I love competing there among the other top players.” 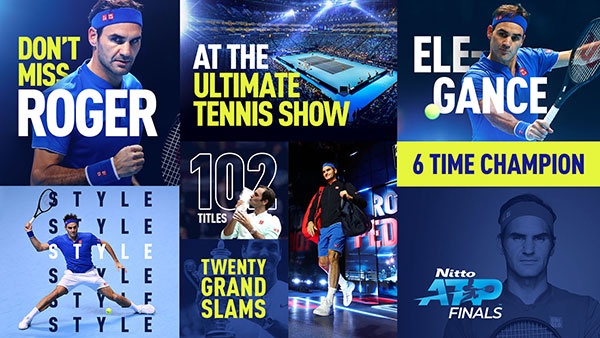 Federer has compiled 1,224 match wins and 102 titles across his 22 seasons as a pro, trailing only Jimmy Connors’ marks of 1,274 match wins and 109 titles. He has won three ATP Tour titles in 2019, capturing the 100th trophy of his illustrious career with an eighth Dubai Duty Free Tennis Championships (d. Tsitsipas) in March, followed by his fourth Miami Open presented by Itau title (d. Isner) — his 28th ATP Masters 1000 trophy. In June, the Swiss earned a 10th title in Halle (d. Goffin) at the Noventi Open, which saw him become the oldest tour-level champion since 43-year-old Ken Rosewall at Hong Kong in 1977.

Additionally, Federer reached a 12th career Wimbledon final at the All England Club (l. to Djokovic), where he became the first player to record 100 match wins at a Grand Slam championship with victory over Kei Nishikori in the quarter-finals. He also reached a ninth BNP Paribas Open final in Indian Wells (l. to Thiem).

Federer is currently in third position in the 2019 ATP Race To London, and in the running to become year-end ATP Tour No. 1 for a sixth time (2004-07, ’09), which would equal Pete Sampras’ record of year-end top spot finishes (1993-98). Three-time qualifier Dominic Thiem is next in line to qualify for the season finale in November, followed by Daniil Medvedev, 2018 Next Gen ATP Finals champion Stefanos Tsitsipas, Roberto Bautista Agut and Kei Nishikori, who feature in the top eight. Alexander Zverev, the 2018 Nitto ATP Finals champion, is currently in 10th position.