Daniil Medvedev has secured his place at the Nitto ATP Finals for the first time after beating Stan Wawrinka on Tuesday at the US Open, for a place in his first Grand Slam championship semi-final. The Russian will join fellow qualifiers Novak Djokovic, Rafael Nadal and Roger Federer at The O2 in London from 10-17 November.

The 23-year-old, who leads the ATP Tour with 49 match wins this season, is the first Russian to qualify for the season finale since five-time qualifier Nikolay Davydenko captured the 2009 crown, when the Nitto ATP Finals was first held in the English capital.

“It’s amazing,” said Medvedev. “That shows what a great year I’m having, that the work I’ve been doing is paying off. But I don’t want to stop. Hopefully I can be there as one of the favourites.” 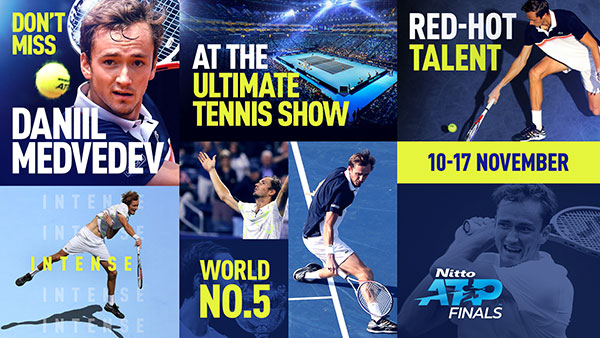 Medvedev has compiled a 19-2 record on the North American summer hard-court swing and became the first Russian in the Top 5 of the ATP Rankings since Davydenko in June 2010. In recent weeks, he has captured his first ATP Masters 1000 crown at the Western & Southern Open in Cincinnati (d. Goffin), in addition to finishing as runner-up at the Coupe Rogers in Montreal (l. to Nadal) and at the Citi Open in Washington, D.C. (l. to Kyrgios).

The Monte Carlo resident also lifted the ATP 250-level Sofia Open trophy (d. Fucsovics) in February, as well as reaching the final at the Brisbane International (l. to Nishikori) in January and at the Barcelona Open Banc Sabadell (d. Nishikori, l. to Thiem) in April.

Three-time former qualifier Dominic Thiem is next in line to qualify in the 2019 ATP Race To London, followed by 2018 Next Gen ATP Finals champion Stefanos Tsitsipas and Roberto Bautista Agut, who are both bidding to compete at The O2 in November for the first time. Kei Nishikori, who qualified in 2014-16 and ‘18, sits in eighth place, with Fabio Fognini in ninth and defending Nitto ATP Finals champion Alexander Zverev in 10th position.

The ATP’s crown jewel event is to be held through 2020 at The O2 in London, where it has been staged to wide acclaim since 2009. The event has successfully established itself as one of the major annual sporting events worldwide, broadcast in more than 180 territories with global viewership figures reaching an average of 95 million each year.