Colombians Juan Sebastian Cabal and Robert Farah have clinched the year-end No. 1 ATP Doubles Team Ranking for the first time as a result of beating Americans John Isner and Sam Querrey on Wednesday at the Rolex Shanghai Masters.

They are the second all-South American team to finish year-end No. 1 (in the history of the ATP Doubles Team Rankings since 1984), following in the footsteps of Chile’s Hans Gildemeister and Andres Gomez of Ecuador in 1986. Brazil’s Bruno Soares was the 2016 year-end No. 1 with Jamie Murray and Soares’ compatriot, Marcelo Melo, finished in top spot with Lukasz Kubot in 2017.

“It’s been amazing and a crazy run this year,” said Cabal. “It’s unreal, we’re really happy and proud about what we have achieved. We have kept things simple and kept the hunger to achieve this amazing achievement.”

Farah said: “It is a great achievement and I will be very happy and honoured to receive the year-end No. 1 doubles trophy. I’ve been dreaming about this forever, so to make it a reality is pretty cool.” 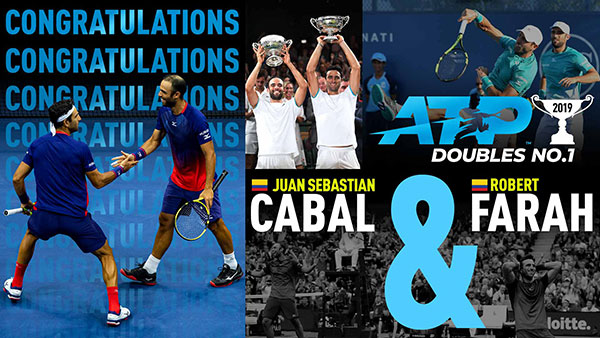 Cabal/Farah has been the standout team of the 2019 ATP Tour season, winning five doubles titles from seven finals. They captured their first Grand Slam championship crown at The Championships, with a five-hour victory over Nicolas Mahut and Edouard Roger-Vasselin in the Wimbledon final, which saw them rise to joint No. 1 in the ATP Rankings on 15 July 2019. Two months later, the pair clinched their second major trophy at the US Open (d. Granollers/Zeballos).

The players also captured the Barcelona Open Banc Sabadell title (d. Murray/Soares) in April, successfully defended the Internazionali BNL d’Italia in Rome (d. Klaasen/Venus) in May, which represented their second ATP Masters 1000 trophy, and won the Nature Valley International in Eastbourne (d. Gonzalez/Zeballos) in June. Cabal and Farah additionally finished runners-up at the Sydney International in January (l. to Murray/Soares) and the Western & Southern Open at Cincinnati (l. to Dodig/Polasek) in August.

Chris Kermode, ATP Executive Chairman & President, said: “The way that Cabal and Farah have stamped their authority on the doubles game this year has been incredibly impressive. To seal the year-end No.1 ranking at this stage in the season is a fitting recognition of the level of success that they’ve had. To finish the season as No.1 is the ultimate achievement in our sport, and they are truly deserving of their position at the top of the game.”

Cabal, 33, and 32-year-old Farah were the first pair to qualify for the 2019 Nitto ATP Finals, to be held at The O2 in London from 10-17 November, where they will be bidding to win the prestigious season-ending event for the first time. The Colombian duo will be presented with the year-end No. 1 trophy at a special on-court ceremony at The O2.