Alexander Zverev has become the seventh singles player to qualify for the Nitto ATP Finals, to be held at The O2 in London from 10-17 November. The 22-year-old German will make his third straight appearance alongside Rafael Nadal, Novak Djokovic, Roger Federer, Daniil Medvedev, Dominic Thiem and Stefanos Tsitsipas in the 2019 field.

Last year, Zverev captured the biggest title of his career at the Nitto ATP Finals, becoming the first player to beat both Roger Federer and Novak Djokovic in the 10 years that both men were in the field (2007-15, 2018). He was the first German titlist since Boris Becker in 1995 and the youngest year-end champion since Djokovic, aged 21, in 2008.

“I am really happy to qualify for the third consecutive year,” said Zverev. “Winning the title there last year has been the highlight of my career so far. I have such great memories of The O2.” 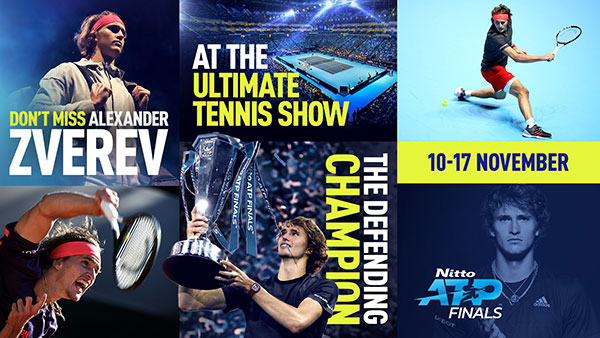 Zverev, who secured his place in the eight-player field after a number of London contenders bowed out in second-round action Wednesday at the Rolex Paris Masters, has notched 40+ match wins for the fourth consecutive season.

The Monte-Carlo resident clinched his 11th ATP Tour trophy in May, winning three consecutive three-set matches at the Banque Eric Sturdza Geneva Open that culminated in saving two match points against Nicolas Jarry in the final. He also finished runner-up at the Abierto Mexicano Telcel presentado por HSBC (l. to Kyrgios) in March and at the Rolex Shanghai Masters (l. to Medvedev) earlier this month. Additionally, he advanced to the Roland Garros quarter-finals for the second successive year.

Italy’s Matteo Berrettini, who is looking to clinch his first spot at the Nitto ATP Finals, sits in eighth position in the 2019 ATP Race To London. Frenchman Gael Monfils, Swiss Stan Wawrinka and Australia’s Alex de Minaur also remain in contention for the final singles berth with less than one week to go of the regular ATP Tour season.

Seven doubles teams — Juan Sebastian Cabal and Robert Farah, this year’s Wimbledon and US Open champions, who will receive the year-end No. 1 doubles trophy at The O2 next month, Lukasz Kubot and Marcelo Melo, Raven Klaasen and Michael Venus, Kevin Krawietz and Andreas Mies, Jean-Julien Rojer and Horia Tecau, Rajeev Ram and Joe Salisbury, and Pierre-Hugues Herbert and Nicolas Mahut — have qualified for the doubles season finale.

The ATP’s crown jewel event is to be held at The O2 in London through 2020. The event has been staged there to wide acclaim since 2009. The Nitto ATP Finals has successfully established itself as one of the major annual sporting events worldwide, broadcast in more than 180 territories with global viewership figures reaching an average of 95 million each year.