The eight-player singles field for the 2019 Nitto ATP Finals is set. Matteo Berrettini clinched the final spot at the prestigious season-ending tournament, to be held from 10-17 November at The O2 in London, following results at the Rolex Paris Masters on Friday.

The 23-year-old Berrettini is the first Italian player to qualify for the Nitto ATP Finals in singles since Corrado Barazzutti in 1978, when the event was contested in New York City. Adriano Panatta, who played at Stockholm in 1975, was the first Italian to compete at the season finale. Simone Bolelli and fellow Italian Fabio Fognini competed as a pair in the 2015 doubles competition.

Eight different countries are represented at the Nitto ATP Finals for the fourth consecutive year. Berrettini joins fellow debutants Daniil Medvedev of Russia and Greece’s Stefanos Tsitsipas alongside former qualifiers Rafael Nadal of Spain, Serbia’s Novak Djokovic, Roger Federer of Switzerland, Austria’s Dominic Thiem and defending champion Alexander Zverev of Germany. It will be the first time that there will be four players aged 23 & under in the season finale since 2009 — Juan Martin del Potro (21), Djokovic (22), Andy Murray (22) and Nadal (23). 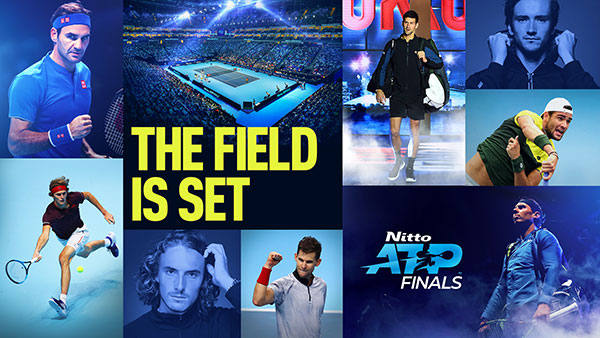 “I would have never thought I could qualify a couple of months ago, I am just so happy to be among the Top 8 in London,” said Berrettini. “It is a great satisfaction and the reward for the superb work that my team, my family and of course myself have put in place this whole year. Now we prepare for the final show! I will be ready.”

Chris Kermode, ATP Executive Chairman and President, said: “This year looks to be one of the most interesting player fields in the history of the tournament with the established superstars of the ATP Tour challenged by the next generation. The longevity of the Tour’s global icons combined with the impressive rise of the future stars of our sport over the past couple of years has made for a fascinating spectacle. It’s all to play for in London.”

Berrettini, who was World No. 57 on 11 March, has soared up the ATP Rankings this year to a career-high No. 9 (28 October) on the back of more than 40 match wins for the first time in his career. In 2019, the Monte-Carlo resident won two ATP Tour titles at the Hungarian Open in Budapest (d. Krajinovic) in April and at the MercedesCup in Stuttgart (d. Auger-Aliassime) in June. He reached the BMW Open by FWU final in Munich (l. to Garin) in May, and also captured his third ATP Challenger Tour title in Phoenix (d. Kukushkin) in March.

In recent months, Berrettini became the second Italian man to reach the US Open semi-finals (l. to eventual champion Nadal) — and the fourth to advance to the last four of a Grand Slam championship, following in the footsteps of Barazzutti, Panatta and Marco Cecchinato. Earlier this month, he beat two Top 10 players (No. 5 Thiem, No. 10 Bautista Agut) en route to his first ATP Masters 1000 semi-final at the Rolex Shanghai Masters.

The eight-team doubles field for the Nitto ATP Finals is led by Wimbledon and US Open champions Juan Sebastian Cabal and Robert Farah, who have already clinched year-end No. 1 for 2019. Lukasz Kubot and Marcelo Melo, Raven Klaasen and Michael Venus, Kevin Krawietz and Andreas Mies, Jean-Julien Rojer and Horia Tecau, Rajeev Ram and Joe Salisbury, Pierre-Hugues Herbert and Nicolas Mahut, and Ivan Dodig and Filip Polasek have also clinched their berths at The O2 in London.

2019 DRAW:
The draw for the 2019 Nitto ATP Finals will take place on Tuesday, 5 November. Further details will be published in due course.

2019 GROUP NAMES:
The Finals Club, an initiative launched by the ATP in 2015 as a way of celebrating the past champions and heritage of the season-ending tournament since its inception in 1970, has honoured former champions through the naming of groups over the past four years. This year’s groups will be named as follows: