The 2019 Nitto ATP Finals, held for an 11th consecutive year at The O2 in London, provided a thrilling finale to the 2019 ATP Tour season, bringing attendance across the 63 ATP events throughout the year to a record 4.82 million fans, while online consumption of the season finale hit unprecedented heights.

21-year-old Greek star Stefanos Tsitsipas defeated Austria’s Dominic Thiem in a memorable singles final, 6-7(6), 6-2, 7-6(4), to complete a remarkable week of matches at The O2. It was only the third time in the history of the tournament (since 1970) that the singles championship match came down to a final set tie-break (1988, Becker d. Lendl; 2005, Nalbandian d. Federer).

Tsitsipas, who had won the Next Gen ATP Finals in Milan just one year earlier, captured the biggest title of his career, as well 1,300 ATP Rankings points and US$2,656,000 in prize money. At just 21 years, 3 months, the Greek became the youngest champion since 20-year-old Hewitt in 2001, and 6th-youngest champion in tournament history.

In doubles, the French pairing of Pierre-Hugues Herbert and Nicolas Mahut captured the season-ending title for the first time in their careers, defeating Raven Klaasen and Michael Venus, 6-3, 6-4. 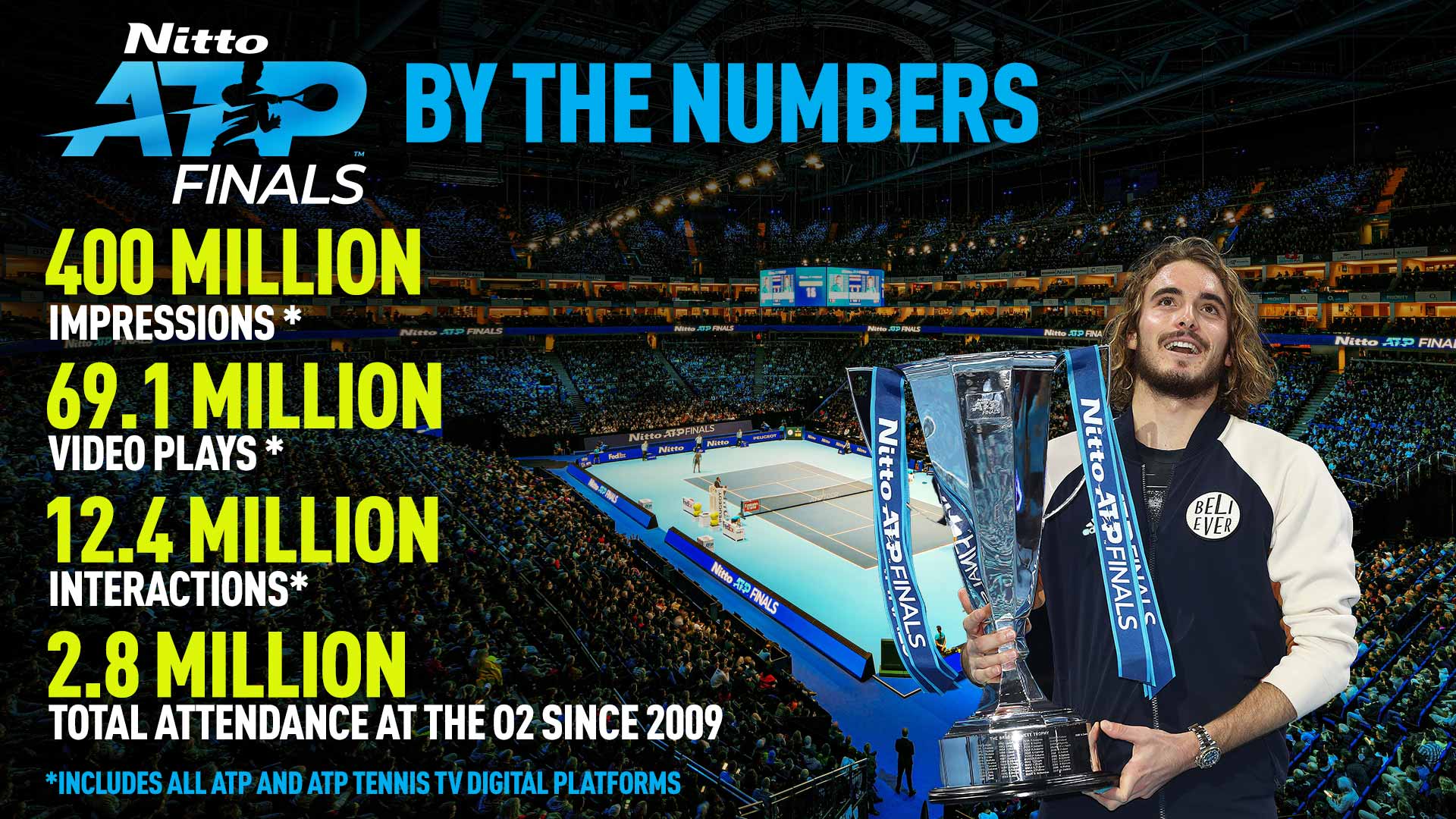 The season finale attracted 242,883 fans to The O2 across the eight days of competition, bringing the tournament’s cumulative attendance since 2009 to 2,803,967. This year’s attendance at The O2 elevated the attendance across the ATP Tour’s 63 events in 2019 to more than 4.82 million fans, an all-time record. The previous highest attendance had been set in 2017 (4.57 million).

The 2019 Nitto ATP Finals also attracted record audiences online, as the tournament generated unprecedented levels of fan engagement across social and digital media platforms. The event received almost 400m impressions on tournament related content – a 97% increase on 2018. And with 12.4m interactions generated across ATP and Tennis TV social media platforms, the 2019 event became the best performing ATP Tour tournament on social, a 145% increase on the previous year. Tennis TV received 41.24 million video views on social media throughout the tournament, taking the platform’s total views on social media in 2019 to more than 1 billion.

Away from the match action, the ATP’s new ATP Tour app was successfully launched, while a five-year renewal of the Tour’s premier partnership with Emirates was also announced.

The ATP’s crown jewel event is to be held at The O2 in London for a 12th consecutive and final time in 2020, before moving to Turin, Italy, in 2021. Fans are able to purchase pre-sale tickets for the 2020 Nitto ATP Finals from today, by visiting: https://www.axs.com/NittoATPFinals_presale

•   399,112,369 – number of impressions across all ATP digital platforms (ATPTour.com, NittoATPFinals.com, live scoring apps, and social media platforms, and Tennis TV) throughout the event, a YOY increase of 97%.
•   69,110,871 – number of video plays on ATP digital media platforms, including ATPTour.com, NittoATPFinals.com, ATP & Tennis TV social media platforms, a year-on-year increase of 88%.
•   41,240,000 – number of Tennis TV social media video views, taking the platform’s total views on social media in 2019 to more than 1 billion.
•   12,397,163 – number or interactions (likes, comments, retweets, replies etc.) on ATP and Tennis TV social media platforms throughout the event, a year-on-year increase of 145%.
•   9,000,000 – amount of prize money (US$) on offer at the 2019 season finale.
•   6,200,000 – viewership in the UK of the BBC Breakfast programme that featured an exclusive sit-down interview with all eight singles players ahead of the season finale. The clip was also viewed on social media more than a quarter of a million times.
•   4,823,370 – number of fans that attended the 63 tournaments ATP tournaments in 2019, an all-time record.
•   2,803,964– cumulative attendance at the season-ending tournament since it moved to London in 2009.
•   2,656,000 – amount of prize money (US$) that Stefanos Tsitsipas won by capturing the title.
•   1,570,000 – number of streams on Tennis TV, the ATP’s official live streaming service, with each viewer watching an average of 475 minutes each.
•   242,880 – attendance inside The O2 arena across the eight days.
•   60,000 – number of single use plastic cups removed from the waste stream through elimination of single use cups and use of tournament take-home cups.
•   3,410 – metres of string used by Tecnifibre, Official Stringers of the Nitto ATP Finals, during the tournament.
•   1,300 – ATP Rankings points won by Stefanos Tsitsipas.
•   310 – number of racquets strung by Tecnifibre during the tournament. No plastic bags were used in the delivery of newly strung racquets to players by the official tournament stringers.
•   11 – number of years the event has been held at The O2 in London. The only city to host the season finale longer is New York, which held the season finale for 13 years from 1977-1989.
•   8 – number of different nations represented in the singles field, for the fourth consecutive year.
•   5 – number of times Nadal, Djokovic and Federer have finished the season as year-end No.1.
•   4 – number of singles players 23-and-under in the field (Tsitsipas, Zverev, Berrettini, Medvedev), the most since 2009.
•   1 – number of continents (Europe) represented in the singles field, a first in the 50-year history of the event.