There are five (or more) new faces in the Top 10 from the previous season for the third year in a row, including first-timers No. 5 Daniil Medvedev, No. 6 Stefanos Tsitsipas, who captured his biggest career title at the Nitto ATP Finals, No. 8 Matteo Berrettini and No. 9 Roberto Bautista Agut. Tenth-ranked Gael Monfils finished in the Top 10 for the second time in his career (also 2016). 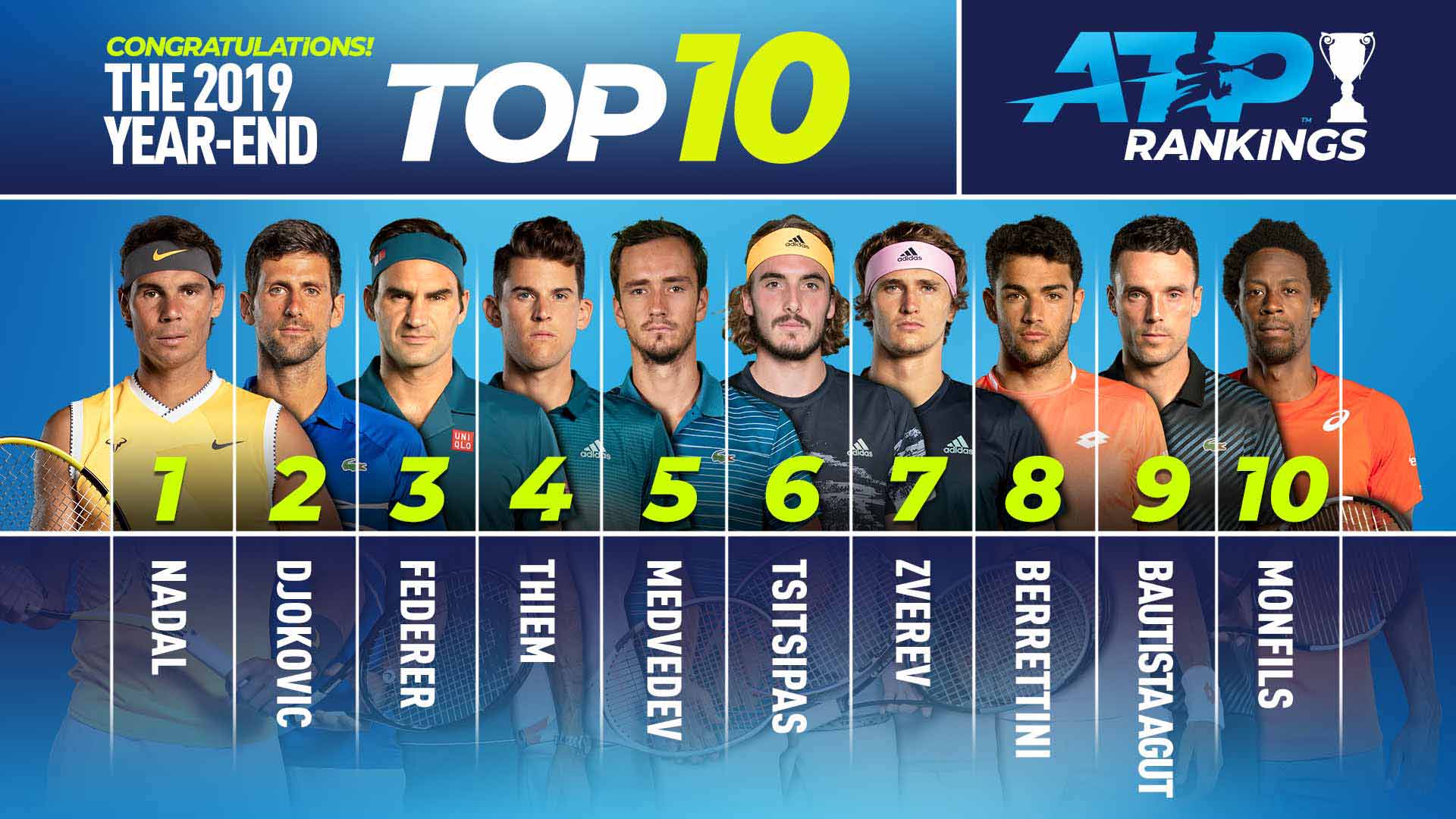 * Federer, 38, finished as the oldest player in the Top 3 and overall it was the Swiss superstar’s record 15th Top 3 season on the ATP Tour. During the season, Federer won four titles, including his 100th career in Dubai. His 103 titles is second in the Open Era behind Connors (109).

* John Isner finished in the Top 20 at No. 19 for the 10th straight year and he joins Nadal (15 years), Djokovic (14) and Federer (19) as the only players to end 2019 with streaks of 10-more consecutive years. Isner has also finished as the top American in seven of the past eight years.

* There were three Russians in the year-end Top 25 for the first time since 2006 with No. 5 Medvedev, No. 17 Karen Khachanov and No. 23 Andrey Rublev. Khachanov also ranked in the Top 10 for 21 weeks during the season.

* #NextGenATP Canadians Denis Shapovalov, 20, and Felix Auger-Aliassime, 19, along with No. 1 Australian Alex de Minaur, 20, are the youngest players to finish in the Top 25. The trio finished with year-end best ATP Rankings, led by Shapovalov at No. 15, De Minaur at No. 18 and Auger-Aliassime at No. 21. De Minaur was the youngest three-time ATP Tour title leader during the season. Auger-Aliassime made the biggest jump in the Top 25, moving 88 spots from No. 109 to No. 21. Overall 13 #NextGen players (21 & under) finished in the Top 100 year-end rankings, the most since 2007.

* Italians No. 8 Berrettini and No. 12 Fabio Fognini finished with year-end best ATP Rankings. It also marked the first time in ATP Rankings history (since 1973) that two Italians appeared in the year-end Top 15. Fognini broke into the Top 10 on 10 June and he ranked nine weeks in that group.

* Colombians Juan Sebastian Cabal and Robert Farah finished No. 1 in the ATP Doubles Rankings and they were the first South American duo as the top doubles team since 1986 with Hans Gildemeister of Chile and Andres Gomez of Ecuador.

* The 2020 ATP Tour season begins Friday 3 January with the ATP Cup in Brisbane, Perth and Sydney.